How and Why: The Age of Dinosaurs – Tonies 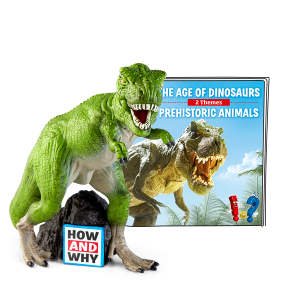 Note: Not suitable for children under 36 months. Toniebox required for use. Wi-Fi connection required for initial setup.

Handcrafted for hands-on play, all Tonies are hand-painted, yet tough enough to be part of the fun not just on, but also off the box.

The Tonie character magnetically attaches to your Toniebox, allowing you to listen to something different every time. Just pop on another Tonie and quickly jump in between audiobooks, music or your own interactive audio adventures, while the content is simultaneously downloaded from the Toniecloud.

The Age of Dinosaurs

The Earth was once ruled by an enormous population of dinosaurs. Whilst enormous sauropods were gentle herbivores and peacefully fed on plants, other dinosaur species like Tyrannosaurus Rex were fearsome predators. Yet, no matter how powerful those enormous reptiles may have been, their mighty reign was brought to an end forever by a tremendous catastrophe.

Since life has existed on Earth, new species have emerged whilst others have become extinct. What kind of place was it when life first appeared? How does evolution affect the development of species? What is a living fossil? And why are so many animal species of our time threatened by extinction?