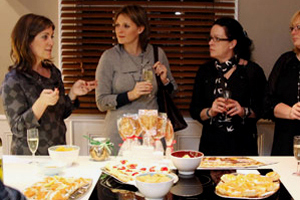 Having talked Design Essentials Speed Networking Style before. Here’s another point of view with huge thanks for this guest blog post from Lucy at Spotty Octopus.

Speed Networking is somewhat of a newbie on the networking scene, some people refer to it as a relation of speed dating, here’s how that works.

One morning Networking woke up and realised that while his Rolodex (this was a while ago!) was full of business contacts, he was missing that special someone in his life. So he went to a matchmaking event, met Speed Dating and fell in love. Out of that love was born Speed Networking, taking both of its parent’s best attributes. Wikipedia doesn’t share this version (but we all know you can’t always trust Wikipedia) but what it does say is this:

From Wikipedia, the free encyclopedia

“Speed networking (or speed business meeting) is a meeting format designed to accelerate business contacts, generally with a bell. Primarily, the practice involves multiple people that gather in a single space in order to exchange information. Participants greet each other in a series of brief exchanges during a set period of time. During an interaction, attendees share their professional backgrounds and business goals. Networkers are generally seeking exposure to new markets and/or to expand their pool of vendors.”

So how exactly does it work, and who is it for? Well let me tell you another story (this one more factually accurate than the last!)

I set Spotty Octopus up last year, created the website, printed the business cards & flyers and got the social media up and running. Then I waited, amazingly offers of work didn’t come flooding through the website, and although I was diligently posting and tweeting, my followers hadn’t reached double figures!

I decided action was needed, and started ‘networking’. I joined groups and attended meetings but the thing is I’m a listener, that’s why I’m good at what I do (being a virtual assistant). I listen to my clients talk about what they do and help them figure out how I can help, freeing up their time to concentrate on their core business. While this is great for my job, it doesn’t work so well for networking as I left events knowing lots about what other people did and having told no one about me and my company. I know networking is not about selling, its about forming relationships but you also need to get your message out there so if the person youve been talking to all evening & formed a great relationship with comes across a friend who needs a VA they know who to recommend!

Then @CamBizLounge tweeted about a ‘Speed Networking’ event being held in March with Wendy Howell and Ed Goodman. Now I have to admit that my initial reaction was one of terror, having obviously seen far too many speed dating events (on the TV of course!) I had visions of rows of desks and awkward encounters where people were ticking boxes on a form in the few minutes you had to make an impression before a bell rang. Still, if you don’t try these things youll never know so off I headed into the dark, rainy Cambridge night.

No deserted nightclub, or sectioned off part of a bar with amused onlookers for us (again just assuming this is what happens on speed dating nights, honestly I’ve never been).This event took place in the Cambridge Business Lounge (another concept that scared and intrigued me in equal measures but perhaps that’s for another post), and as I shook off my umbrella, walked up the stairs and through the door I was pleasantly surprised. I was greeted by Ed (co-owner of Cambridge Business Lounge), hugely personable and friendly with a knack at putting you straight at ease, told to hang up my coat and help myself to a drink (to my delight amongst the juice, water, teas and coffees were several bottles of wine, a glass of which was bound to help!).

After pouring myself a healthy sized glass Wendy came and introduced herself. Wendy is the force behind bringing Speed Networking to Cambridge and again brilliant at putting you straight at ease (she also runs a company offering stylish, contemporary home accessories and occasionally appears in Vogue!). She offered to show me around the Business Lounge, which is made up of a main working area including reception, seated area and desks (which can be hired for co-working) and then various sized meeting rooms which can also be hired.

By the time we got back from the tour it was time to get things started and I noticed that Ed was holding the dreaded bell that would be my master for the evening. I waited to be ushered away from the relaxed and informal surroundings of the main room (& more crucially away from the wine and nibbles) but thankfully this was not to be.

After a brief overview of the running order, we got started.

Take a pen and write on the back on people’s cards or leaflets. You meet a lot of people and it can be hard to keep track (although that may have just been the wine!).

Not being a natural seller this format worked really well for me, having to talk about Spotty Octopus for a minute meant I felt like I actually got a bit about my business out there. After several connections we took a break, this provided an opportunity to talk more to the people we’d met briefly and refill glasses, all that talking can be thirsty work. And then we started again and so it went on until everyone in the room had talked to everyone else and it was time to call it a night.

I met some lovely people that night, too many to mention them all here and not wanting to offend any by leaving them out I’ll leave them all out! They are relationships which have continued over twitter and email and in some cases have also resulted in work (which, while people may be reluctant to say it, is why we all network in the first place).

I would definitely recommend it, regardless of whether you’re a seasoned networker or a newbie this is a fun, useful, rewarding event. A big thank you to Wendy and Ed, and role on 6th June for the next one…

You can connect with me on twitter @spottyoctopus or find out more about what we do at www.spotty-octopus.com.

Wendy can be found on twitter on @wendyh1 and you can find out more about the next speed networking event.

And last, but by no means least, you can find Ed and the Cambridge Business Line on twitter @CambsBizLounge and online at www.cambridgebusinesslounge.com.